A couple of weekends ago, our family got to take our first weekend trip to see more of Spain. We had enjoyed a lot of great daytrips in the last six months, but the holiday weekend was the perfect chance for us to wander further from home. We headed to Granada by way of visiting friends in Malaga, and also saw some really lovely places along the way. Nerja was one of them. Our friends in Malaga recommended we take the long route to Granada along the coast (we’re all from California, and they said it would remind us of the Highway 101) and we are glad we took their advice. 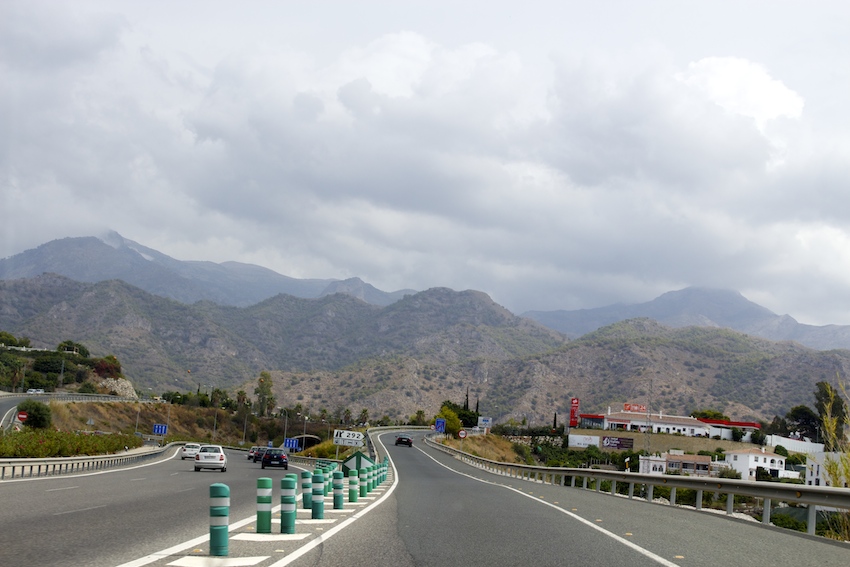 The drive was indeed beautiful, but so was most of the drive back to El Puerto from Granada– so I will have to do another post on the landscapes along our little road trip.

The town of Nerja is full of old white-washed buildings in its historic center. There is a long promenade which leads to a lookout point (mirador) on the Mediterranean Sea– really lovely.

If you visit Nerja, there is a little Italian restaurant on one side that has a balcony overlooking the beach. (That’s where I took this picture.) I expected the food to be just passable, given that the location was the obvious attraction for tourists, but everything we ordered was really good!

I don’t know a lot about Nerja’s history, but what I learned via Wikipedia was interesting enough to share with you here:

Nerja has a long history, evidenced by the primitive paintings found in its famous Nerja caves, discovered in 1959. These caves are now believed to be just one entrance to a linked series of potholes stretching many miles into the mountains between Nerja and Granada, and which may yet prove to be one of the most extensive unexplored systems in Europe. Visitors to the caves will be able to view the remains of one of the ancient inhabitants of Nerja.

The Romans built here three settlements, including Detunda, of which now large remains can be seen. The area was later taken over by the Arabs in the early 8th century. Under the Moors, the town was known as Narixa, which means “abundant spring”, from which the present name derives.

The Balcón de Europa, a mirador or viewpoint which gives stunning views across the sea, is in the centre of the old town. Its name is popularly believed to have been coined by King Alfonso XII, who visited the area in 1885 following a disastrous earthquake and was captivated by the scene. Local folklore says that he stood upon the site where the Balcón now stands, and said “This is the balcony of Europe”. Local archive documents are said to show that its name predated this visit, but this has not prevented the authorities from placing a life-sized (and much photographed) statue of the king standing by the railing.

The Balcón area was originally known as La Batería, a reference to the gun battery which existed there in a fortified tower. This emplacement and a similar tower nearby were destroyed during the Peninsular War. In May 1812, the British vessels Hyacinth, Termagant and Basilisk supported Spanish guerrillas on the coast of Granada, against the French. On 20 May, Termagant or Hyacinth opened fire and the forts were destroyed. Two rusty guns positioned at the end of the Balcón are reminders of these violent times. The huge lumps of rock, the remains of La Batería, visible in the sea at the end of the Balcón, are further evidence of this action.

What I enjoyed the most about Nerja was the gorgeous volcanic beaches on either side of the lookout. Unbelievably pretty.

I imagine that you can find some pretty private beach spots, if you wander through those giant rocks. It was a really overcast day– I imagine it’s even more beautiful when the sun is out.

Here’s the beach on the other side, definitely lovely, but more developed. We’ll have to go back for a swim next time, for sure!

What a beautiful little town, with such cool beaches! If you ever find yourself in Granada or nearby, it’s definitely worth the drive to check out Nerja. I know we’ll be back!

Making a big pot of chili this afternoon, and look

My lemons this year are gigantic, and so juicy!

Happy New Year from the three of us! This will be

Thanks for all of your sympathy and healing wishes

Well, baking sourdough in a Dutch oven is all fun

It's been 10 years since this very memorable famil

I would say our strongest Christmas morning tradit

After what feels like quite a lot of work and some

Looking for some Christmas feelings, we headed up