The appearance of stinging nettles in my neighborhood is exciting, because it marks the beginning of the foraging season! Last year, spring came in so late that we were desperate enough to go collect nettles that had just barely broken out of the frozen ground. We brewed beer with them and found some fun ways to eat nettles, too. That was our first real experience working with nettles, and this year we want to do a whole lot more! 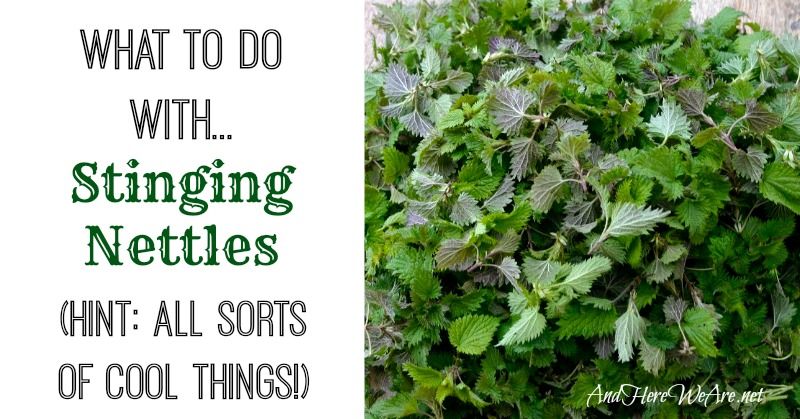 For those of you who have nettles growing in your area, you should definitely take advantage of this fantastic plant! It can be used as a super-nutritious food, as an herbal remedy (awesome for those suffering seasonal allergies) as a beauty aid, and even to help your garden!

I will show you what I do with stinging nettles, and then point you to some great ways to use them! Many fancy markets or farmers’ markets will sell stinging nettles, but I like to gather them myself. Foraging for nettles is fun, and a really nice way to spend a Sunday afternoon with your family or some friends. Here are some extra tips on identification, in case you are unsure. 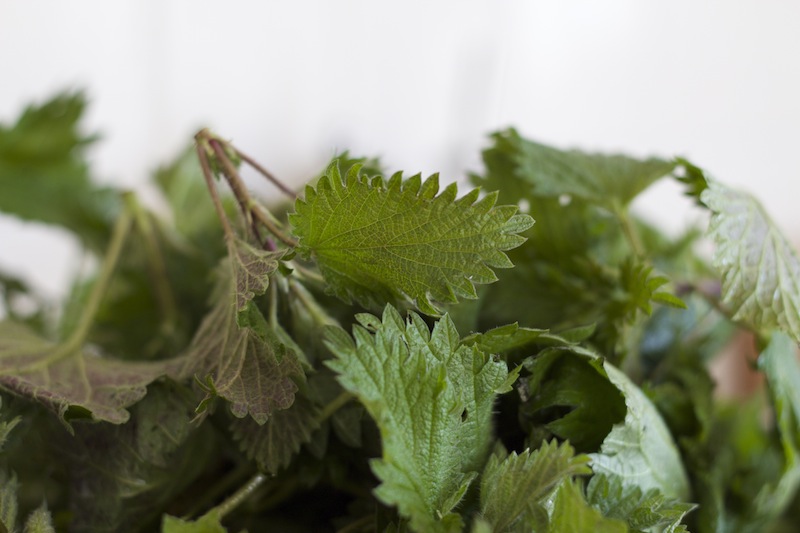 What to Do with Stinging Nettles

Once you have gathered about a bucket-full (we take a big grocery bag or two when we gather them) it’s time to process them. Using gloves and/ or kitchen tongs, give them a good rinse. I usually fill a big metal bowl with cold water and add some white vinegar to it. I do this because– let’s face it– animals pee on plants in the wild. It could be dogs, foxes, or maybe the toddler who just couldn’t hold it– who knows? I try not to be squeamish about this, but adding the vinegar and giving them a good wash makes me feel better. Swish the stinging nettles around in the water, and change it once or twice.

While you’re washing the nettles, get a big pot of water on the stove and bring it to a boil. 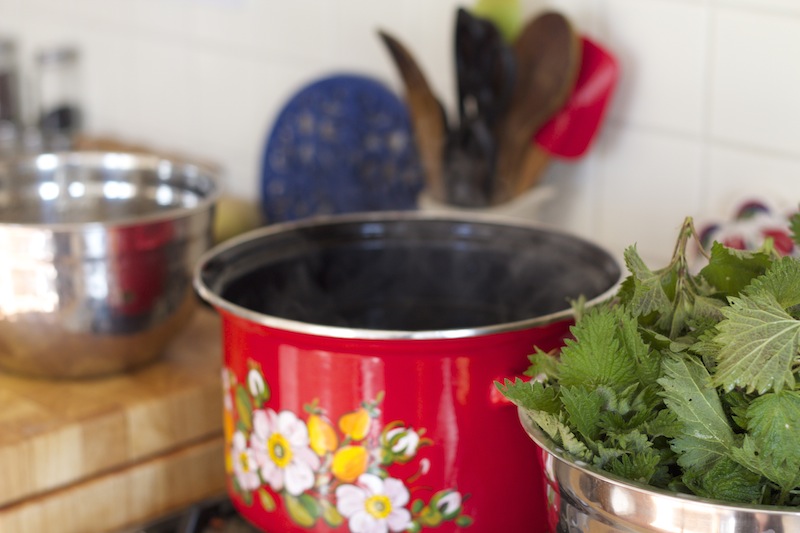 Take big bunches of nettles with your tongs and put them in the boiling water. Let them cook for about a couple of minutes until limp, then transfer to another bowl. After you have blanched them like this, they can no longer sting you. 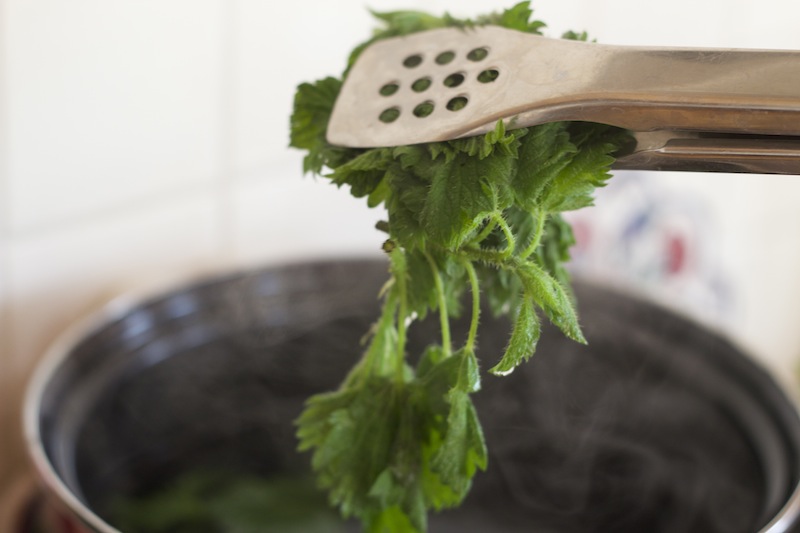 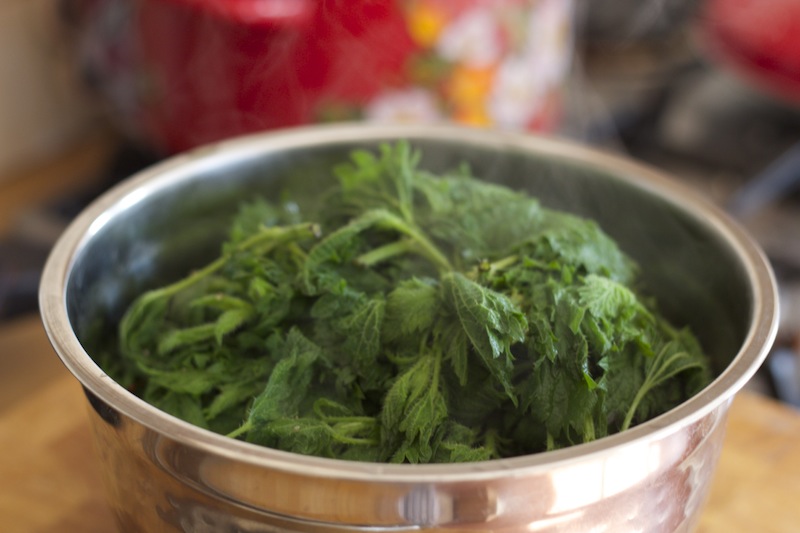 Once you have finished blanching all of them,  press more of the water out of them (back into the pot, I’ll explain later) and move them to the bowl of a food processor. If you are using a blender, then leave the liquid in. Alternatively, you could dry them in a clean dish towel and roughly chop them up with a knife.

Process them until reasonably smooth and uniform. To make an awesome Stinging Nettles Dip you can start with them just like this, in the food processor. When I worked with them this time, I took half and put them in silicone baking molds (I use these for everything– big fan!) to freeze, and left half to make dip with.

Put the molds into the freezer, and then when they are firm, pop them out and store these discs in a ziplock bag to use in soups, dips, and all sorts of things — see recipes below!

Now, all of that water you have left in your blanching pot is nettles tea! We use it for Making Wild Nettles Beer, and we have also made wine with it. You can also just drink it. Some people ferment it slightly first. Yesterday, I strained mine into bottles and put it in the fridge. If you sweeten some with local raw honey, then you will have a powerful tonic for fighting seasonal allergies.
Other uses and benefits of nettles tea include:

Not only are nettles super nutritious and tasty, but they are beautiful. Nettles produce an emerald green soup like no other plant I know. There are lots of ways to use them, and you can substitute them just about anywhere you would use spinach, once blanched. Here just some of the possibilities:

Other Uses for Nettles

We are so lucky to have such a powerful and useful plant growing for free in our midst. I hope you’ll get out there and collect some nettles this spring! They are best while they are young, and not much good to eat after mid-June. 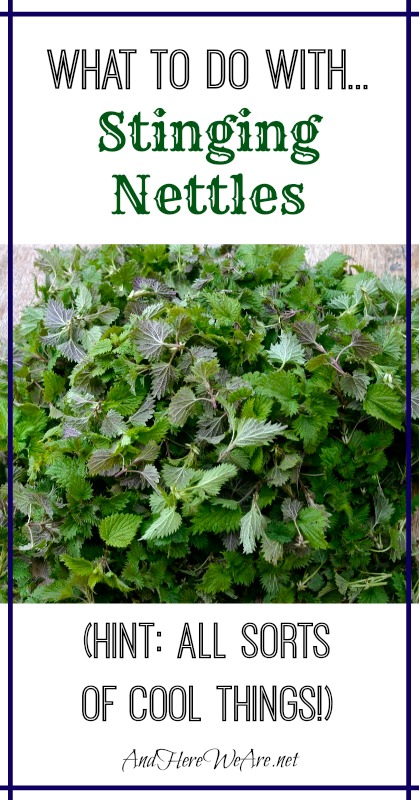