This was a surprisingly difficult post for me to write. And it turns out that I had a lot to say. So please make yourself a cup of coffee and get comfortable. Let’s talk about when dreams come true.

I am very aware of– and so grateful for– all of the many good things that come to us in life, and also accustomed to looking for hope and meaning in the challenges that have come our way. I think I’m pretty good at that, actually. It’s even become a part of my identity. What I am not so at ease with is actually receiving what I have dreamed of for years. It feels strange and even a little uncomfortable, if I’m honest. So I haven’t really known where to start with this post about when dreams come true, and that’s why it’s taken me about five days since we received our wonderful news to write about it.

If you have been following along here with us for much time at all, you probably know that I am ready for a new adventure. We have been here in England for over three years, and love so much about this country. And we’re ready to live somewhere else. You may know that we were really hoping to get a DoDEA job this summer, and were really disappointed that it did not happen for us. That job would have met so many of our felt needs, and when the doors closed, we regrouped and refocused on making a good life here for another year. If you’ve been around for a while, you might even know that my ultimate dream has been to move to Spain someday. And if we take it even further, my deepest longing is to live near the sea someplace sunny.

About two weeks ago, Jeff’s employer emailed him to let him know that the position in Rota, Spain (that had been our fantasy for as long as we’ve been expats) had opened up. Would he like to apply?

Now I am going to tell you something crazy.

Jeff read me that email, we looked at each other, and quickly dismissed the opportunity.

Why?  I don’t know why, exactly. We had a few minor reasons that seemed justifiable to us in that moment. Jeff immediately wrote back with a no, thank you.  That’s right. Live and work on the southern coast of Spain? No, thanks!

I have thought about this response a lot in the last couple of weeks. All I can figure is that we were just scared to get what we have wanted for so long. We had also freshly committed to life in the UK for another year, and had a lot of plans to make this year in England the best yet. We were determined, and at peace with the loss of the previous job opportunity. So we brushed it off, said no right away.

Before you get too upset, I should tell you that it only took about 18 hours for us to recover from our temporary insanity. I woke up the next morning thinking, Wait, what??! Someone just offered us the hope of that very thing we have been waiting for all of this time! Why would I ever, ever say no to that?

That evening, we went to the beach and I expressed all of this to Jeff. When we thought rationally about the reasons we had said that we wouldn’t apply, we realized that they were very, very small obstacles between us and our long-held dream.

Have you ever had a dream that didn’t even seem rational? That’s how it’s been with me and Spain for over 15 years. I don’t know exactly how, why or when I decided that I want to live in Spain someday. There were actually very few things that I truly wanted in life in my college years– I wanted to have a family, to help people somehow, and to eat good food. And I wanted to live in Spain.  I had never been there (or anywhere in Europe) when I decided this. But I worked diligently at becoming fluent in Spanish. I read a lot of classic novels in Spanish. I loved Spanish music, watched tons of Spanish movies, and pretty much just kind of quietly obsessed about it. I had no idea how I would get there, but I just wanted to.

About five or so years into my obsession, I finally got to go. Jeff made it happen. We went to Andalucia for two weeks on our honeymoon (almost 10 years ago.)  We stayed in Sevilla, Ronda, and a tiny white-washed village called Cartijima. We both loved it, and I felt more sure than ever that I’d like to go back and live there. By the way, this was my first time ever in Europe, too. Sold!

(The picture on the right is of me, in Ronda almost 10 years ago.)

When Jeff first started looking at jobs with his company, back in Portland, we noted that there was a base they serviced in Spain. We quickly learned that it was so hard to get a placement there because people loved it and rarely left– and then if it did open up, there would of course be a whole lot of competition!

I don’t think we necessarily expected to be able to get a position in Rota, but we still hoped for that, and it’s one of the reasons we have stayed here. We have been waiting for it to open up, so we could try for it.

So… Back to two weeks ago. Once Jeff and I came to our senses, he applied for the position. And reflecting on it now, I think our reaction (not even willing to consider it) was simply there for self-preservation. Because it was a huge emotional roller coaster. We had nothing but positive signs along the way, but wanting it so much and seeing the possibility was kind of painful.

Something else I had to grapple with was the fear of getting what I wanted.  I am not sure how to explain this, and wonder if maybe you can relate… I am so comfortable with being thankful for what comes my way– for wanting what I get— and not used to getting what I want. Does that make sense? The idea of actually being given what I have been quietly begging for, for years, was terrifying to me. I am only recently coming into the understanding that it is OK for me to desire. Desire is not a weakness, it turns out, but a signpost.

When Jeff first applied, I found myself just feeling so scared. Something in my previous experiences told me that I would receive a punishment along with this reward. I confided this to some friends, and recognized that this was something I would have to just work through and not let it ruin this for me. The following morning, I woke up with the realization that maybe it’s not so much about me getting what I want, but about my desires guiding me to where I am supposed to be. Well. That is completely different, isn’t it? This was so freeing.

Thankfully, it was less than two weeks between Jeff applying for the position in Rota, getting interviewed, and being offered the job. Thank goodness! That was such an intense period of time for us. We woke up thinking about Spain, went to sleep thinking about Spain, and could hardly think of anything else in between. We didn’t tell anyone (except for the friends who helped me out with my fear issues) because we felt like we had already taken everyone –you all included– on such a ride with the last job search. We didn’t want to get anyone else’ hopes up for us, as the disappointment would be that much more painful.

Last Thursday, Jeff came home a couple hours early, completely unexpected. He knocked on the door instead of unlocking it himself, and when I opened the door, he was holding a bottle of champagne and shouting, “Vamos a España!”

I think we both felt like we might throw up. He had been screaming in the car the whole way home, and his voice was hoarse. We were completely exhausted, and it took us a couple of days to let go and relax into the knowledge that this is happening.

(This photo is of us on our honeymoon.)

We are incredibly happy. Although this dream has been mine the longest, it’s something all three of us want very much. Amelia has never been to Spain (besides our trip to Tenerife) but she has sensed our enthusiasm and it’s been on her Places I Want to Visit List for a couple of years now. I mean, who doesn’t want sunshine and sea in their daily life?

So, we’re moving to Spain. In February.

There are a few other things I have to tell you about this incredible piece of news.

I’ll be honest that it’s kind of hard to wait. I mean, it’s Spain! It’s really going to happen! We will be living on the coast. There will be sunshine. Amelia will learn a second language, which is something I have always wanted for her. My favorite foods will be in season for most of the year. Honestly, it’s hard to believe any of this is real.

But in the meantime, we are working really hard at being present here in England. Fall is arriving at least a month early, and I am wrapped in a wool blanket and a wool sweater as I type this. It’s raining. But autumn here is absolutely glorious. We have been foraging this weekend, and last night I started a huge batch of Elderberry Wine. We’ll drink it at Christmas time in Spain in 2015. Imagine that!

If you have made it all the way to the end of this post, I just want to thank you. Thank you for listening, and for being here with us on this very exciting and sometimes terrifying and usually wonderful journey.

Have you ever had a big dream come true for you? What was that like? Were you scared at all? 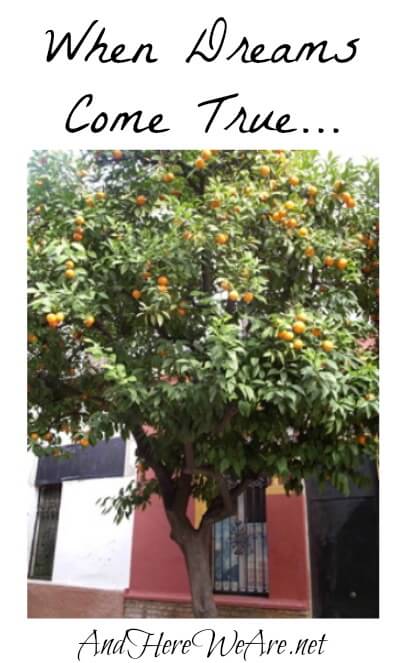