Knowing of my husband’s love for Belgian beers, our kind hosts in Ghent (you have to read the story of how we met!) arranged a tour for us at Huyghe Brewery, best known for their most popular beer, Delirium Tremens. We love tours of interesting things! Especially when we get to drink beer as part of it!

Unfortunately, that morning we had woken up and run to the grocery store for breakfast, but discovered that they wouldn’t open for a while yet. We had planned on stopping for a bite on our way out to the brewery, but of course we got lost and had to make up the time. Thus, we showed up at a Belgian brewery with completely empty stomachs, not even a cup of coffee in our systems! (Luckily, Amelia doesn’t need coffee, and we found an apple for her.) 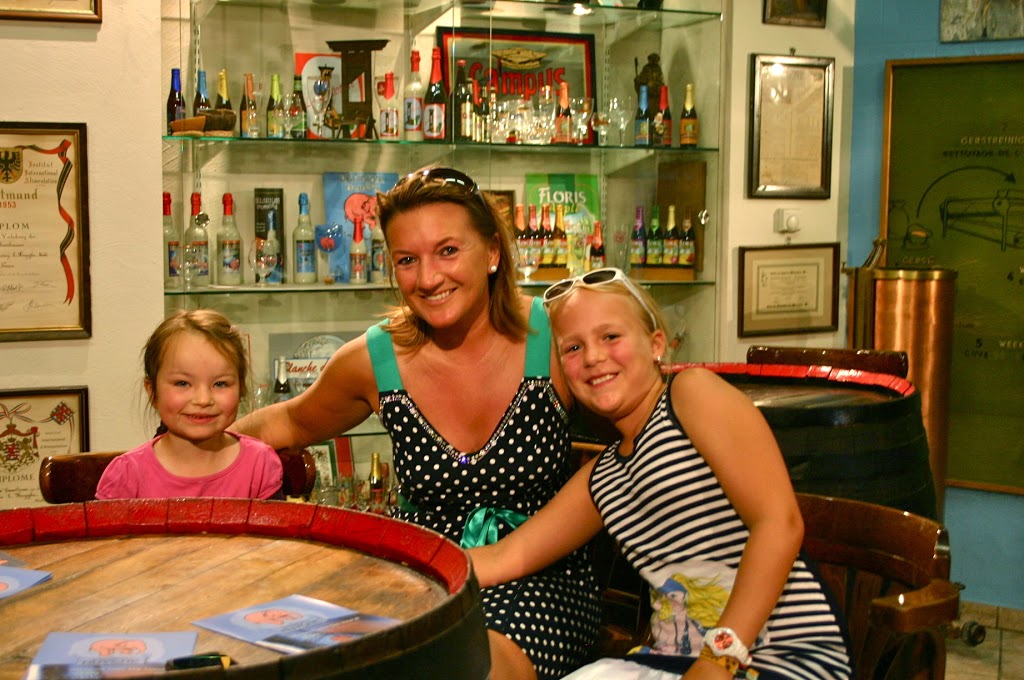 We started out in the tasting room, and learned some of the brewery’s history. I think a lot of people have heard of Delirium Tremens, but less are familiar with Huyghe Brewery (that was the case with us, as well.) As our guide explained to us, many of the smaller breweries have been in trouble in the last twenty years. They are struggling to compete with larger brewers, and many have been bought up by the likes of Heineken. However, Huyghe was saved when their signature brew, Delirium Tremens, was proclaimed the Best Beer in the World in 2008 at the World Beer Championships in Chicago, Illinois. The demand for this beer was so high that they expanded their brewery, and thus the less-famous beers were also able to continue being produced. They have even started producing beers for other companies. (Here’s a valuable tip for people in England– they are the brewers of the Marks & Spencer-labeled Belgian beer!) Much of the brewery is decorated with the now-famous pink elephant that the super-strong beer is said to induce illusions of. The brew has a very clever name, as Delirium Tremens  is the medical word used to describe acute alcohol withdrawal. They had to sell it in the USA under a different name for a while, since this ruffled the American sensibilities. Apparently, we have gotten over it!

Amelia wasn’t exactly enthralled by all of this back-story.

The tasting room was actually much more like a beer museum. I loved seeing all of the antique equipment and paraphernalia.

This statue is of St. Arnold. His was the sage voice of reason during the time of the plague, suggesting that people drink beer rather than water, thus saving many lives, and venerated by beer brewers today.

On to the the actual brewing!  This is the old brewery, which is still used when their more modern facilities are maxed out. It is all so beautiful, isn’t it?

This kid has toured a few breweries now, and she is a really good sport!

This is where brewers can taste the wort. It’s the tea-like liquid made by cooking the grains in water, the first step in brewing.

Something fun about this room was all of the comical, whimsical beer-related paintings.

Did you read the Franco-Belgian Asterix and Obelix comic books when you were a kid? My family did, and this picture looks like it’s straight out of one them.

Now, they have an updated brewing facility, which is much more efficient, in terms of time, energy and water. Another perk of having everything computerized is that the brewer can begin the brew process from his home computer, up to four hours before coming to work.

For the record, it felt a whole lot like a sauna in this room, with all of those huge tanks of hot wort!

Next, we went to the place where they keep and mill the grain. Apparently, it must be cracked very precisely for optimum flavor.

Outside, we saw huge tank after huge tank of beer in various stages of ferment.

So, if someone asked me to describe a brewery in four words, I would say: Tanks, hoses, pipes and gauges.

This is the room where our tour guide announced, in his standard informational tone, but with a twinkle in his eye, that beer is all-natural, made only with grains, herbs, sometimes fruit and pure water, and therefore is a very healthy drink, as long as you watch the alcohol levels. (Here’s to good health!)

And here is the bottling plant, where old bottles are washed, de-labeled and sterilized. New and old bottles are cleaned and filled, labeled, some are pasteurized, and all are eventually packed.

Here is a stack of labels for a “table beer” which is very low in alcohol (1.5% ABV.)  Elena told me that she used to drink this as a child– they brought bottles of this camping, when water supplies were questionable.

Outside, there were towers of bottles and kegs. Most of these are waiting to be re-used.

(Recycling can be beautiful…)

Alright! Once we’d seen it all, it was time to start tasting! We really lamented our empty stomachs, as we could have had as much as we’d wanted. I had a raspberry lambic, which I told myself was a whole lot like a fruit smoothie.

The girls had lemonade, and dressed up in the hairnets we luckily didn’t have to wear on weekend tours. (We would have worn those AND lab coats, if it been during production!)

We tasted things. They were all good.

My favorite was called Red Delerium, which was a cherry version of Delirium Tremens, with an 11% ABV. (!)  Once again, we sincerely rued our misfortune of showing up here with empty stomachs, needing to drive to our hosts’ home afterward. We were very good, and only sipped a few things.

We stopped and did a little shopping, and Jeff bought one of those signature pink-elephant glasses to pour his new-favorite beers into. And, I couldn’t leave without getting a picture of our endearing tour guide. Asking him if I could take his picture both pleased and embarrassed him. Then, he handed me a nice stack of Delirium coasters, and pulled out pink elephant masks for the girls.

We left happy, sober, and very glad to know where these pink elephants came from.

I hope I have done this wonderful tour justice! It was so fun and interesting, and a really wonderful way to get to know Belgium a little better. Next, I will show you photos of our boat tour through the waterways of old Ghent!

Third time at the beach today. The first was for w

My kind of drama.

Packed my car with food, swimsuits, and my bike fo

My work week is over, and I have a couple hours al

Yesterday we had our weekly seafood dinner, but co