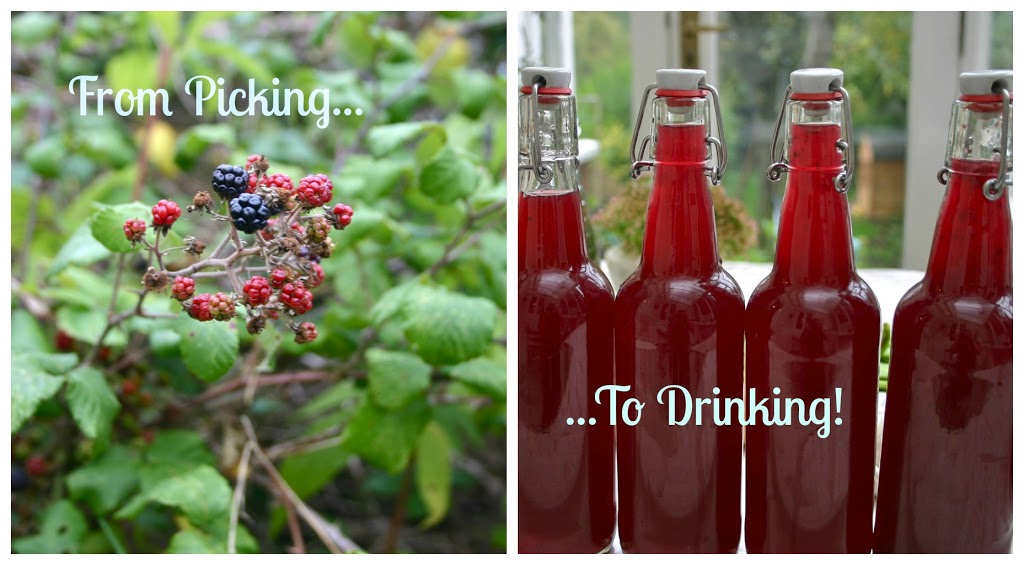 Well, everyone, I made Blackberry Cider, all by myself! OK,  so I have to start off by telling you that I don’t have any real experience with brewing anything besides kombucha (which you should totally try, if you haven’t!)  Four out of five of my brothers like to brew all sorts of alcoholic beverages, so my main source of experience is in tasting stuff and being interested in what other people are doing. Also, I tend to have an aversion to following instructions.
If anything, all of these qualifiers should serve to encourage you to try brewing, especially if you are good at following recipes, or don’t mind winging it. Even without any guidance, I managed to come up with a wild culture and make a really nice brew. Once again, this is less of a specific recipe and more of a “Look what I did, I’ll bet you can too!” sort of post. I’ll give you some helpful links.

The beginning of the process was actually before foraging for blackberries. I made a starter culture by accident when I was trying to make a lacto-fermented strawberry drink. This was a matter of mixing strawberries, water and sugar, and covering the jar with cheesecloth and letting a natural culture grow. When I noticed that it was bubbling, I tasted it and was really happy to identify right away the familiar cider yeast flavor that I taste in local Suffolk ciders. That drink was really good, and I have to say I was really surprised that it turned out so well, especially since I had so little idea of what I was doing. But I saved some of that culture for future use. Here is a good link on developing a natural cider yeast. Of course, you can also order a commercial yest. This one is said to work well for ciders. I will just note that mine was bulkier in body, but that may have had something to do with actual strawberry fruit in mine.
[Update: Since the time of this first brewing experiment, I have made so many wonderful homebrews! I have also learned that this is not technically a cider because it does not contain any apple juice– maybe Sparkling Blackberry Wine would be a better name. ]
Here are some basic homebrewing supplies you will need for this project: a demijohn, an airlock, a funnel and swing-top bottles.
What I Did:

1. When we got the blackberries home, I added some bay leaves from our tree, and cooked them with a gallon of water for about an hour.

2. I added a lot of sugar, and let it dissolve. (Again, just look up a recipe for better proportions!)

3. I sterilized a demijohn, strained the berries, and pressed as much liquid as I could out of them, and poured the syrup into the demijohn. I topped up with water, and just made sure that it tasted really, really sweet. The yeast feeds off of the sugar, and so there needs to be plenty in the mix. I let the liquid cool to about body temperature before adding my starter culture.

I didn’t have a whole lot, and was worried that I had waited too long to use it without feeding it, and that it might be inert. But I went for it anyway. I put the stopper and airlock on, wrapped the jar in a tea towel to protect it from the light, and let it sit.

I think that I had really pushed the limit with keeping  my culture alive, because nothing happened to my jug of juice for the first week or so. I really thought I had just wasted all of those berries. But I still left it, and didn’t check again for another week or two. And when I did, I was really surprised! The above pictures were from when I realized, “It’s alive!!!”  It smelled good and beery, but was still way too sweet, and not fizzy enough. I gave it another week wrapped up next to a heater, and it was looking good.

4. So at about week three, I was ready to siphon it into bottles. I bought grolsch-style bottles, which tend to handle carbonation better and don’t need to be capped or corked. You can see in the glass above that there wasn’t a lot of carbonation at this stage. Putting them in bottles and letting them sit out for a few more days let the yeast eat some more sugar and catch the co2 produced by that.

I made sure to save plenty of the yeast for my next brewing project. There was such a thick layer this time! And this time around, I also fed it some extra sugar after a week, to keep it happy until I used it for a ginger brew yesterday.

Here’s a little sample of the Blackberry Cider today– look at all that fizz! I’m not sure what the alcohol level is, but I’d guess somewhere around 5%, just on taste. It’s still a bit sweeter than I prefer, so I’ll let it sit a while longer and eat some more of that sugar up. It is really delicious!! And the best part was surprising and impressing my husband with the results of my very nonchalant approach to home brewing.

Right now I am also in the middle of my first attempt at making elderberry wine with fruit we picked in our neighbor-woods— I’ll let you know how that goes, but it will require more time. A really nice part of making this kind of cider is the time factor– we can enjoy the brew less than a month after the fruit-picking.
I hope you’ll look into making your own beverages– it’s a lot of fun!Here are some resources you might want to check out, if you want to read more about home brewing: Booze for Free and True Brews.

Do you play mad-scientist at home sometimes? What was your most surprising creation?