We just returned from a whirlwind weekend trip to do some house hunting in Spain, where we’ll be moving in less than three weeks! I thought I’d share some of the things we saw, and what we’re learning about finding a house to rent in Spain.

First of all, we did not find a house. That’s OK. It was a learning experience, and I believe it was still a good idea to go out there before our move, because it will inform some of our decisions going forward.

Before we get to the houses, let me just say that the weather was gorgeous. Yes, it was cold, and at times really, really cold (like mid-30’s) but the skies were a gorgeous, deep blue the whole time. The sun really warmed things up by the afternoon, and it was pretty blissful for us, coming from short, gray days in England.

The plan was to arrive in El Puerto de Santa Maria Friday evening, and see a place via a co-worker at Jeff’s new job. Then, we would head to Sanlucar de Barrameda, 30 minutes away, to see another place. Then we would meet with a rental agent to see a whole slew of properties that she had booked, based on the long list of properties we had been sending her for the past month.

Everything went as planned, up until the part where the agent got involved.

The place we saw the first evening had a great rooftop terrace with a view of the ocean. But the kitchen was honestly just way too depressing, and the outdoor space was seriously tiny. The property in Sanlucar was nice! Small, but brand new, and I loved the style. The owner is a really friendly, helpful guy that speaks great English. And there was another really nice rooftop terrace, and it was a quick walk to the beach, pictured below. It feels like a real possibility, but I honestly would hope for more outdoor space and a bigger kitchen. 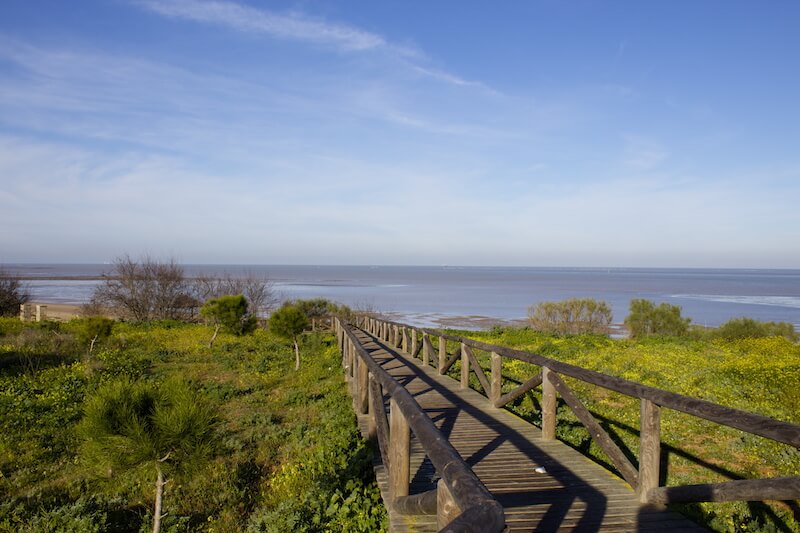 Just one day before we left for our trip, the rental agent we had been in touch with told us that she couldn’t show us any properties in Sanlucar, where the homes and prices looked the best to us. If we had known in time, we definitely would have found another agent to show us places there!

So, we hurried back from Sanlucar to meet up with her and see the properties she had for us. Keep in mind, we had sent her at least 30 properties over the course of a month, and they all had outdoor space, and most of them were fairly small in terms of number of rooms, and most were single, detached homes.

When we arrived at her office, she told us she had just realized that we didn’t want to look at the kinds of homes most Americans do– “urbanizations” which are condos, mostly without any garden space. She said she was quite shocked about this, and had assumed otherwise until just now. Ugh.

She also said, “Maybe you don’t even want to see the properties I have to show you?”

Um… We all just flew over here on an airplane to do just that. So, let’s just go ahead.

She got lost looking for every single property. At one point we were just walking around neighborhoods for 20 minutes, looking for a property. And yes, she is from El Puerto.

She was obviously having a very bad day. I understand. I have bad days, too. But this was such a huge bummer.

Here’s what a typical urbanizacion looks like. They have big common areas with swimming pools, but little to no private outdoor space. The insides can be nice! Or terrible! It depends. Most are vacation rentals.

After showing us a couple places that were not even close to what we would want, I just told her that I didn’t want to waste any more of her time with these kinds of places. She had a couple of “chalets” to show us, so we went ahead to see those.

Again, lots of driving around and getting lost and asking people for directions. One of the houses was OK, and fairly close to the beach, with a big yard. But it was also kind of depressing, super dirty, and really dated. I had planned on taking pictures to share with you, but once we were there, I couldn’t bring myself to, knowing that I wouldn’t want to have ugly pictures on my blog.

Sure, we can spruce it up. But I want to feel a little happier about a place before I sign up to live there for a long time! She was really pushing for us to rent that one. I kind of got the feeling that she had a special arrangement with the owner, because I couldn’t understand why she thought it was so amazing.

We saw another one in a really nice neighborhood. The yard was great. The inside was WEIRD. And the kitchen was truly awful. Sigh. Then she told us that it was listed for 1,400 euros, not our 1,000 euro maximum. She thought the owner could adjust the price a bit. We said not to worry about trying to negotiate. This led us into another conversation about what we’re looking for.

Again, the agent commented that she had been surprised to hear that we wanted a yard, and that it’s hard to find a big place with a yard within our price range.

Jeff and I have been looking at listings online for months, and we know that they are out there! And for less than our max! We also let her know that we never said we wanted a big place. In fact, we don’t– I’d love to keep housework and energy bills to a minimum. This brought to mind one more property. I had a headache and we were all super hungry and tired by that time, but we said we would be willing to see it.

First we had a hard time finding it, then the keys wouldn’t work. When we finally got into the gated area, we had to look all over the complex for the place. But once we found it, it was nice. It’s kind of an urbanizacion, but different from the others because it has its own yard and it’s a corner unit. The complex is really small and quiet. It has a beautiful rooftop terrace, and a (distant) view of the sea. And it had the best kitchen we’d seen all day (admittedly, that is not saying much!).

It bears mentioning that we had actually sent her this listing! It’s the only one we had asked to see that she had chosen to show us. That was a victory of some sort. And of all the places we had seen with her, it was definitely the most promising.

A couple of issues we have with it is that the home comes completely furnished. Fortunately, the owner has nice taste. And he may be willing to move some of his things out, but that will increase the price, as he has to pay for storage. It would be a very long walk to the beach, but there is a community swimming pool. So, we are thinking about it.

The agent is of course telling us things like,  There aren’t very many listings right now, and they’re going fast! You need to decide now! It’s hard to find the kind of property you want, so you’d better take one of them! But I don’t believe it. There are so many listings available right now, and I am just disappointed that we didn’t connect with the right person to show them to us.

Here are some things that make house hunting in Spain a bit more challenging:

Anyway, that is how our house hunting went. We were thrilled to say goodbye to our agent, cut our losses, and start focusing on enjoying Spain for the short time we had left.

(OK, now I feel like I just have to take a moment to say that I think our agent was a nice person. She just wasn’t doing a good job, and she knew it. She said that even if we didn’t find a place to rent through her, she would still like to hang out with us when we come back. We might!)

We went out for lunch nearby and sat there in the sunshine, marveling that this place will be feeling like home to us soon. Then I asked Jeff if we could see how long it would take us to get to the beach from the property we had just visited. We drove for quite a while. Maybe there’s a quicker way, but it won’t be a short walk, that’s for sure! Once we got to the beach, we found the most amazing thing! A bar on the beach. I think I’ll write a whole post about that. We raised our glasses to a good life in Spain, no matter where we decide to rent.

Whew!  So, the house hunting was disappointing, but we really did have a fun time there, and really enjoyed the sunshine and getting to know the areas that will soon be so familiar to us.

We’re continuing to look at properties from this side, and still considering that last one. We’ll see!

I think we’ll end up living in temporary housing for a while after we arrive, and then move when we find the right fit. You may be wondering at this point why we bothered to go over there to look, when we could just stay in temporary housing… It is because we want to get Amelia back in school as soon as possible. She can’t enroll in a school until we have a long-term housing arrangement. So we really want to find the right place as soon as possible.

Thankfully, this is a very slow time for the housing market, so there are lots of places available, and there is less urgency to snag something.

Thanks for coming along with us on this adventure! I’m looking forward to sharing more with you soon!