I thought I’d share today about something that is so normal and classic here, but that still makes me roll my eyes– school uniforms. Granted, when I was Amelia’s age, I was being homeschooled with a bunch of other kids, and the only rule about what we could wear was that we had better not have slept in it the night before!  I have never had to wear a school uniform in my life, although all of my Filipino friends wore uniforms for absolutely everything. Not only were the school uniforms distinctive, but you could also figure out where almost anyone worked, just based on their outfit– entire offices of workers wore the same colors and styles. But I still don’t totally get the obession with uniforms.For our first year here, Amelia was going to the state (public) school down the street. Uniforms really only involved a standard gray dress or skirt, with a white top and then royal blue cardigan or sweat shirt. You could find all of the necessary pieces at any store, and they were all really inexpensive. The only tricky part was finding the royal blue cardigans, since that color is not as popular in our area as navy blue, red, and forest green, required by most schools. It was really nice to only need regular clothes for the weekends and vacations, and replacing worn out uniform pieces was fairly easy and inexpensive. And I LOVED the gingham summer dresses!

And seriously, what could be more adorable than a box-pleat skirt and crocheted knee-highs? 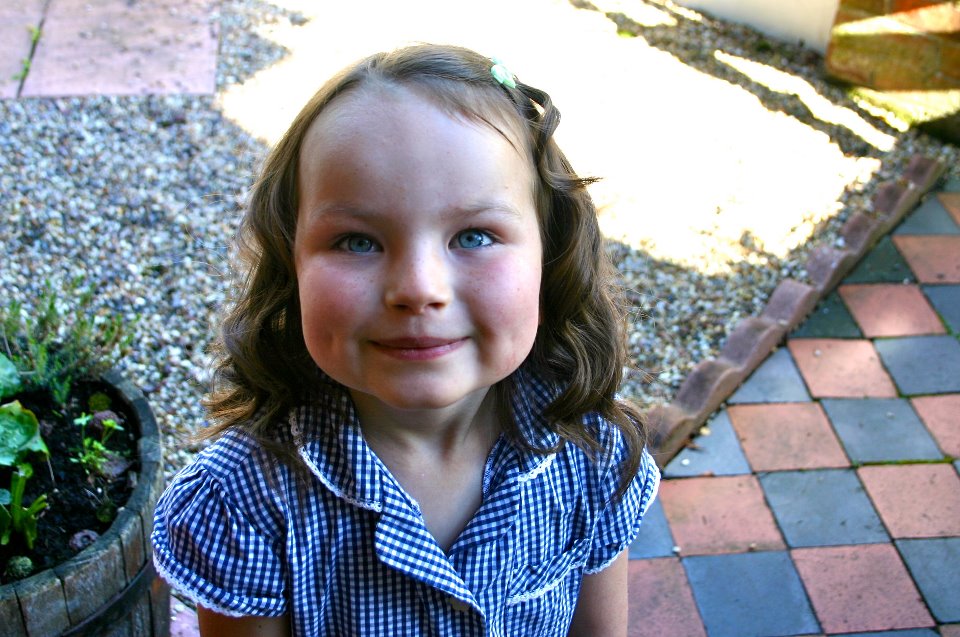 Then, we switched to a private Montessori school this year. And uniforms became a big deal. There has been so much talk and energy spent on uniforms! Every time I hear the words “proper uniform” I just want to roll my eyes and shake my head! I don’t know how anybody gets it right, day after day. And the whole uniform situation in private schools is very expensive. We are lucky, in that there is a second-hand shop at our school, where uniforms that have been grown out of can be recycled to younger students. This has been our saving grace– another family we know spent £500 getting one child fully outfitted, with only one dress, and all of the basics. I know that my UK readers may think I’m just being silly here, but let me assure you– the school uniform situation in the USA is just so different, in my (admittedly limited) experience.

OK, so what exactly does an elementary schoolgirl have to have in her wardrobe for a private school?
Well, first there’s the basic uniform: 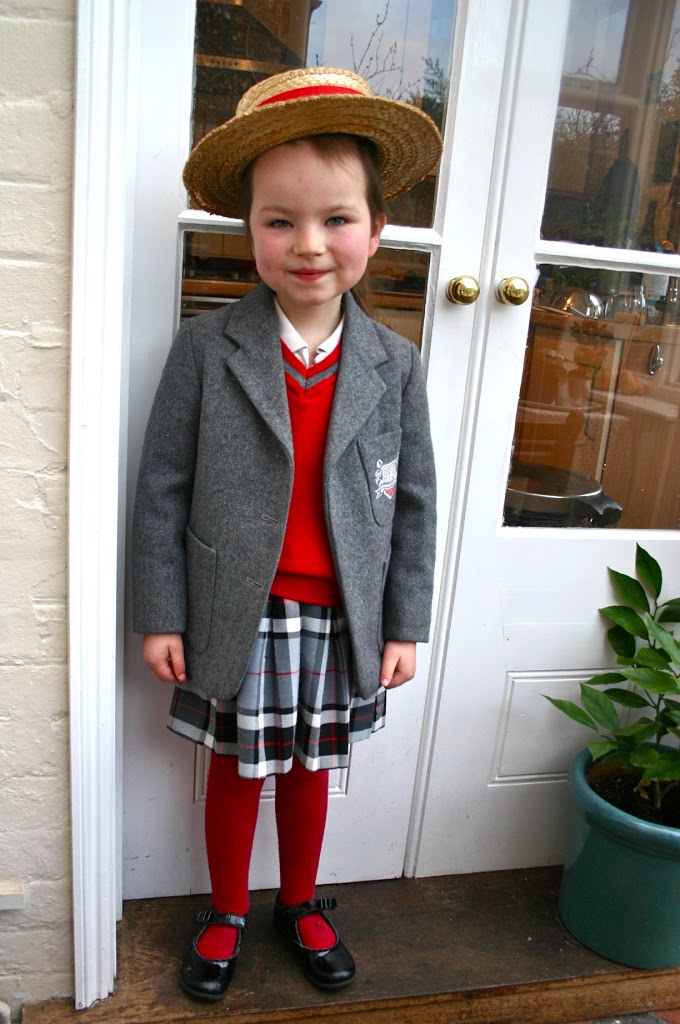 Plaid dress (we would call it a jumper, but in the UK, a jumper is a pullover sweater, and a dress like this is a tunic,) white collared shirt, school sweater (jumper in UK terms,) wool blazer with school emblem, red or gray tights, black dress shoes, and the all-important boater hat. Super cute, right? Hair must always be worn up, too.

In the summertime, the girls wear light cotton collared dresses. Amelia’s looks like a candy-striper’s outfit. And I need to fix the button and find the belt that goes with it before the summer weather arrives. (Sigh.) 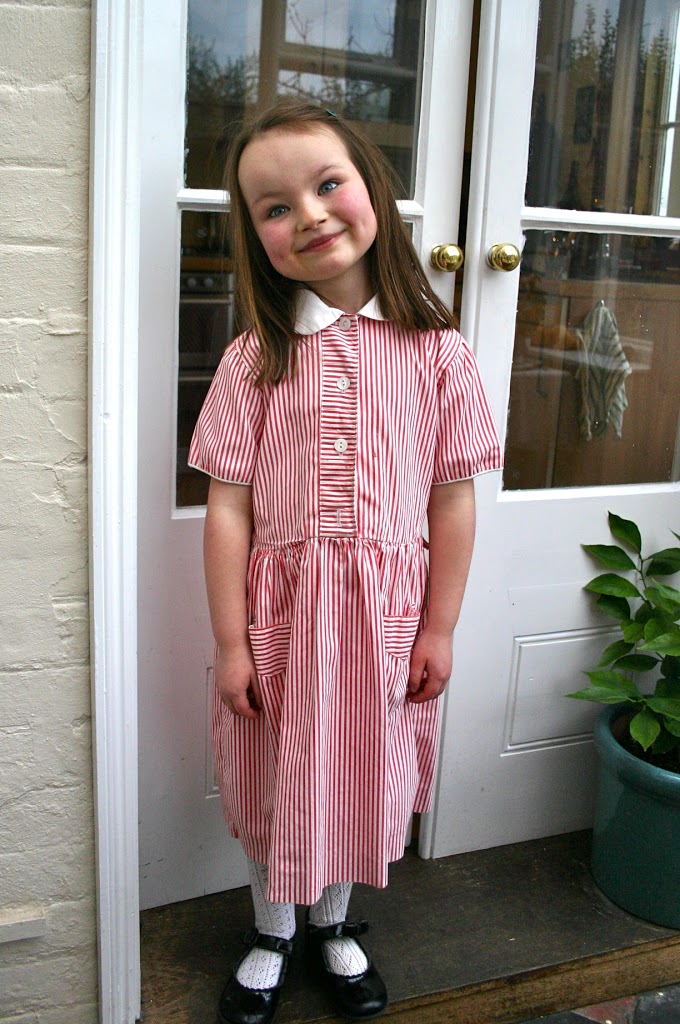 These are worn with either red tights or white cotton knee socks.

Here’s the one that seriously cracks me up: The Boiler Suit. This sort of thing is pretty much only worn by mechanics in the States. But the kids at Amelia’s school change into these every single time they go outside. “It’s recess, kids! Go change into your boiler suits!”

I guess it’s a good idea to protect those super-expensive uniforms, after all.
Then there is the P.E. gear. One set for indoors and warm weather, one set for outdoors or cold weather.

A collared shirt with the school emblem, and tiny little navy blue shorts. I’m glad they are OK with pink shoes, even though I’m sure they’d prefer black.

Sweatshirt and track pants, both bearing the school emblem.

In addition to the summer and winter ensembles, the kids each own a smock that they wear for art classes (and maybe cooking classes, not sure!)

And then, there’s outerwear. Amelia has a big red parka, red mittens, a scarf and a red beanie with the school emblem on it, plus a gray rain slicker/ wind breaker. In addition, she has a huge school-branded duffel bag and backpack. It’s a lot for a kid her size to carry.

And to be honest, I’m probably neglecting some odds and ends, and to be even more honest, we’re probably a little non-compliant, missing other pieces of her required uniform that I’m not fully aware of. The staff are probably rolling their eyes and bringing us up in staff meetings as a problem family who can’t seem to keep their kid in “proper uniform.”  Especially when hair clips are blue or pink, instead of the accepted red or black. Proper uniform is apparently super, super important. It’s how the school presents themselves. Anything that is not the same as the other children draws attention and, in a way, disgraces the school. Uniforms seem to be another status symbol, as well– in my experience, the need to dress your kid for a private school is an big expense on top of paying the tuition– it is prohibitive, as most schools do not have a second-hand shop. We only own one of each dress, and all of the items that have a school emblem on them– you can’t buy them cheaply, you have to go through a specific department store or company that has a contract with your particular school.

And here are my questions for you– Americans:  Does this seem a little excessive to you? Brits: Do you struggle with outfitting your kids, or am I being a big baby? Other nationalities: What are your school uniform situations like?