So, the day after visiting Izola and Piran, we headed over to Croatia. I will be honest with you– pretty much Jeff and I had no idea in our minds about what Croatia would be like– we hadn’t thought about it much at all. Now that I’ve been there, that seems totally crazy to me. Why isn’t everyone talking about how incredible Croatia is?  We were pretty much awestruck. We love Italy, and we were so surprised by the verdant charms of Slovenia. But our day in Croatia was filled with so much beauty that I have had a hard time writing this post. I could tell you all sorts of things about Brijuni Island, but really, those interesting facts pale in light of the mediterranean paradise we visited. Roman ruins? Cool. But the color of the water, the absolute clarity of the sea, those cyprus trees along white rocks up against the blue of the ocean and the sky?… Unbelievable! So please forgive me if I am short on words here. Let’s just look. 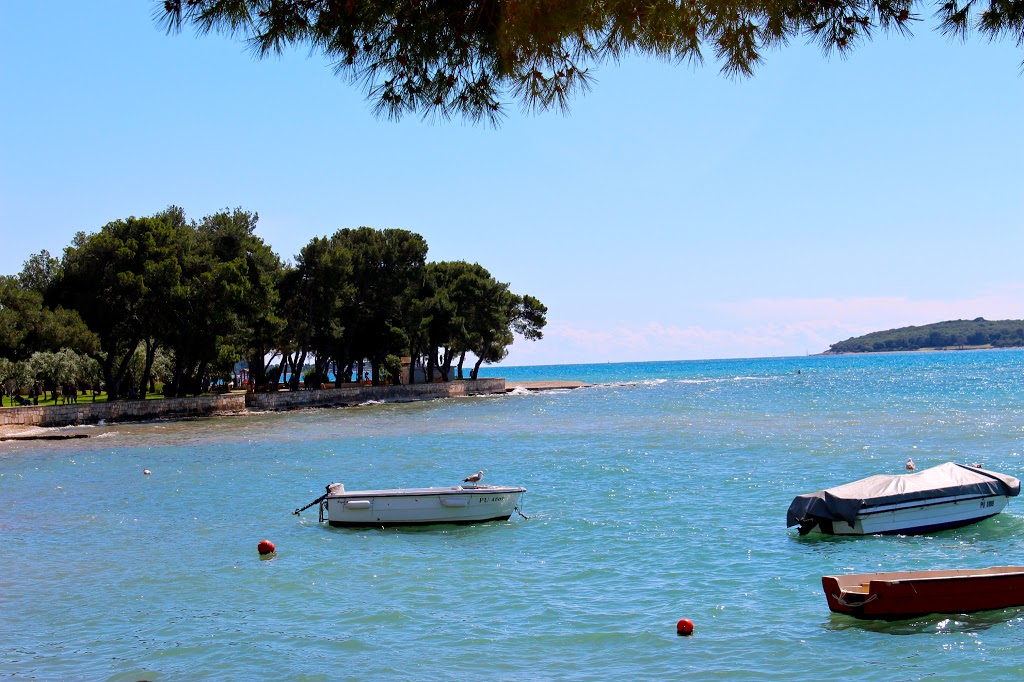 This is Pula,  the town that we drove to, where we took the ferry over to Brijuni. It was raining pretty hard when we arrived, so we stopped for lunch and waited for the skies to clear. Oh, and clear, they did!

Riding on the ferry was fun, and gave us a nice perspective of Pula.

A first view of Brijuni:

This is where we disembarked. The island is now the property of the Croatian government, and they have tightened up visitor regulations. For us, that meant that we could only go over as a part of a tour. We were assigned a tour guide for English-speakers, and boarded a tiny train to get a quick ride around the island.

All any  of us wanted to do is go put our feet in the water and hang out. But it was super interesting to see all the different angles of the island. Below on the right, you see a herd of deer.

OK, so I do have to get into some history if I am going to explain a bit about what you see… There was one name that came up over and over as we talked with our hosts and their friends: Tito. Do you know who Tito is? He was the president of the former Yugoslavia, seen as a benevolent dictator. According to our friends, he was actually a terrible leader– but everyone loved him and many still look back on the days of his office with incredible nostalgia. He was very showy and extravagant, even in the midst of relative poverty in Yugoslavia. Brijuni Island was his personal retreat, and there he entertained guests and friends– many of them celebrities or politicians. The reason this is important is because Tito recieved many animals as gifts from his illustrious friends. So there are many exotic animals on Brijuni– including an elephant given to him by Indira Gandhi.

The highlight of seeing some of these animals was the chance for Amelia to finally meet a zebra in person. Zebras have been her favorite animal for about four years, and she is slightly obsessed with them. So this was a big deal!

Another interesting feature was a church, and there were quite a few lovely statues worked into the piney landscapes.

But all that really mattered to me was this (see Roman ruins on left, but it was the color of the water that did me in):

The fact that I never got to touch that water still kind of makes me ache.

In the photo on the left below, there is an olive tree that is 1,700 years old!! Next to it are kids approximately 7 years old.

We walked around quite a bit, and visited a museum dedicated to Tito, filled with stuffed wild animals and former pets, and well as hundreds of photos of him with important people. Anika told me that on the day Tito died, everyone– even school children– went into deep mourning. Everyone remembers it as a very significant day in their lives.

After about 2.5 hours, the boat was leaving, and we reluctantly boarded after snapping a couple of quick family portraits.

Back in Pula, the angle of the sun made everything that much more dreamy and made me want to sigh over and over again.

And so, this concludes our big, surprising, difficult-but-wonderful trip to Italy, Slovenia and Croatia. The next day we ran some errands and cooked dinner for our hosts, then we spent our final day in Trieste, and came home that night. Thank you so much for enjoying it with us– sharing makes it even better for me.

Back in another (pre-expat) life, I used to thrift

Seriously COLD and windy this morning (and for the

Got leftover veggies? Make soup!! We do our groce

Happy New Year, everyone! May you find joy in 2021

I told Jeff today that every time we visit Sevilla

Oh, I just love all of the laden orange trees ever