After the wedding ceremony at the courthouse, our lovely newlywed couple got on their super cool antique bus, and had a light lunch with family. As we were driving back to the house from the beach, the bus showed up behind us, and it was fun to pull over and be honked at and to wave at everyone as they headed toward Sint Laureins, where the reception and dinner would be held.OK, so I managed to bring my camera that evening, but without a memory card inside. Oh, no! But honestly, the reception and dinner were both lit mostly by candles and low lights, and I don’t like to attract attention by using my flash, so I guess it’s alright. But I found a couple pictures from the website of the venue–  Het Godhuis was such a cool place, I have to share it with you! Also, check it out here. 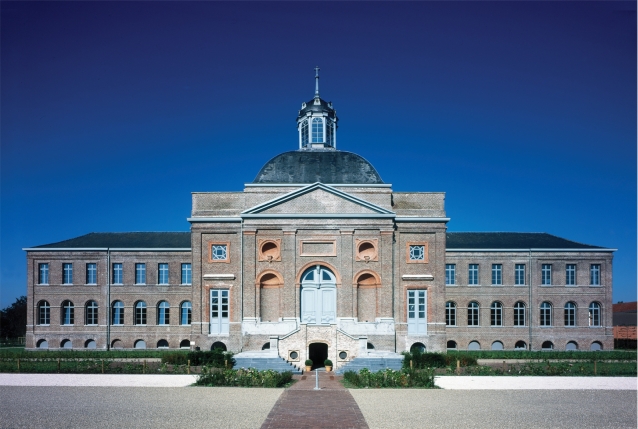 In Belgian tradition, there are different parts of the celebration, and the attendees might only be invited to certain parts. We were glad to attend the courthouse wedding, the reception, and then the dinner and party. We arrived at 7 p.m. for the reception. See the little black door at the bottom center of the building? That leads down into the grotto, a very cool cellar with arched brick ceilings. There, we had champagne and a really nice assortment of hors d’oeuvres, mostly involving seafood. My favorite thing was an oyster station, where one gentleman worked really hard shucking huge fresh oysters, while his partner gave them a squeeze of lemon and a twist of black pepper, and served them on the half shell over a bed of fresh seaweed. So delicious! Amelia had her first raw oyster (I really wished I had my camera for that!) 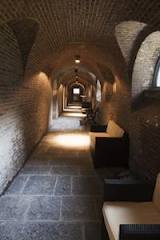 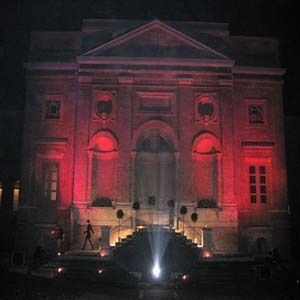 The bride and groom had arranged a fun surprise for their guests. They had hired a “punk” (complete with mohawk, tattoos, plaid pants and piercings) to play classic Belgian tunes on an accordion. It was funny.

Around 9 p.m., we were led up several spiral staircases into the banquet hall where we would have dinner and the rest of the party. We were seated with some really friendly, interesting and informative people who explained everything to us. It was so fun to actually find out what was going on all evening, even though everything was in Flemish!

One note-worthy event happened right after the bride and groom had been announced and we had all been seated. We were sitting there chatting, and then all of the sudden the lights went down (except for dance lights which were going everywhere!) and some loud dance music started playing. A whole bunch of servers marched out, carrying bottles of wine, parading around the room. They lined up very formally in front of the groom’s table and presented him with the wine to try. He declared it good, and then the dinner had officially begun. This is apparently a standard Belgian tradition, I think called The Wine Parade, and always with the same song.

The meal was really nice, three courses of traditional Flemish food. The cake presented another really interesting tradition:  the lights went down again, loud music played, and then the cake (a four or five layer ice cream cake) loaded with blazing sparklers, was wheeled out onto the dance floor. The cutting of the  cake was done by the couple together, but they did not feed it to each other, as we do in the USA. The dessert for us was like a child’s dream come true! We all lined up in another room for a dessert buffet, which was table after table of really fancy desserts, fruit, huge bowls of candy, and of course plenty of chocolate. Amelia was beside herself!

After dessert, and coffee (which I sure needed at midnight!) it was time for dancing. The first dance, however, was not the newlyweds’ first. It was a Belgian traditional song, which was played as all the guests and bridal party pulled out their napkins and waved/ whipped them in the air. The couple stood on their chairs, and it got really lively! I found a video to share, to try to convey the fun atmosphere:

The song is always Connemara, which, oddly enough, is a French song about Ireland. Huh? I know, but it was a lot of fun!
After that, it was the more typical dances, bride and groom, father-daughter, etc. Then… It was just time for everyone to dance, all night long! They had a great DJ who played a blend of American disco, 80’s hits and traditional Belgian music. And we danced, and we danced, and we danced! I guess it’s pretty typical here for people to stay and dance literally until the sun rises. The environment was really fun and wholesome. The waitstaff kept passing out sandwiches and drinks to keep everyone hydrated, and it was seriously a blast. We are not used to staying up that late, and, to be perfectly honest, really not used to so much fun. 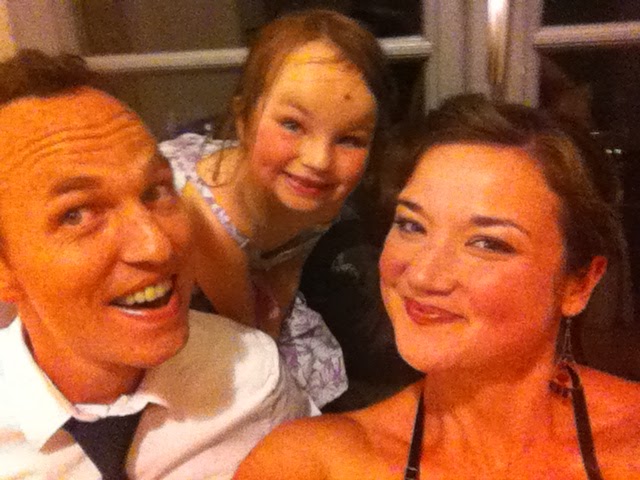 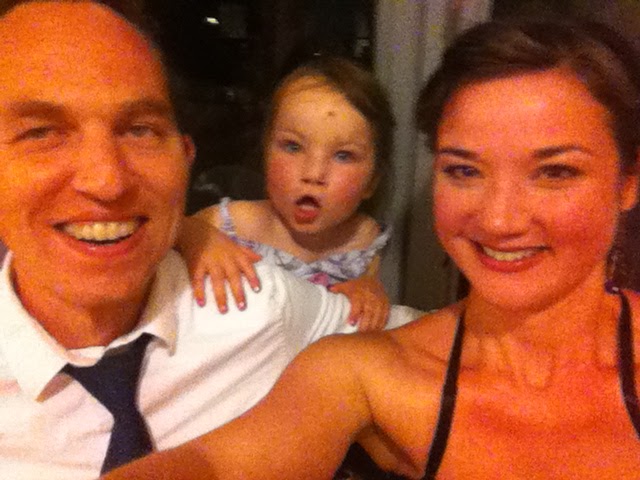 If it weren’t for the fact that one member of our party was a six year old, I think we could have easily stayed all night. We left at 3 a.m., immediately sad that the party (for us) was over, and that we didn’t have any more Belgian weddings coming up to look forward to. Those that were up for it would be eating breakfast with the bride and groom in a few hours.

Well, I hope this was interesting! I wish I had more pictures to show you, but hopefully you could imagine it well enough. It was such a wonderful experience, and I thanked Elena and Henry for inviting us and letting us be a part of such a wonderful day in their lives. This was Amelia’s first wedding, and I’m pretty sure we’ve set her up for some serious disappointments in the future!

Have you had the privilege of attending a wedding in another country or from another culture? Were there any surprises?