After our sunny afternoon in Izola, we drove down the coast a few minutes to the edge of Portoroz, where we found a place to park. From there we walked along the seafront to a very picturesque town called Piran. We had been eyeing Piran from a distance– Antonio had set up a telescope from their living room, zoning in on the church in the center of this charming little place on the tip of Cape Madona.

Doesn’t it look like it’s out of a story book?

(If I was writing the book, this little boat would be delivering the town’s mail.) 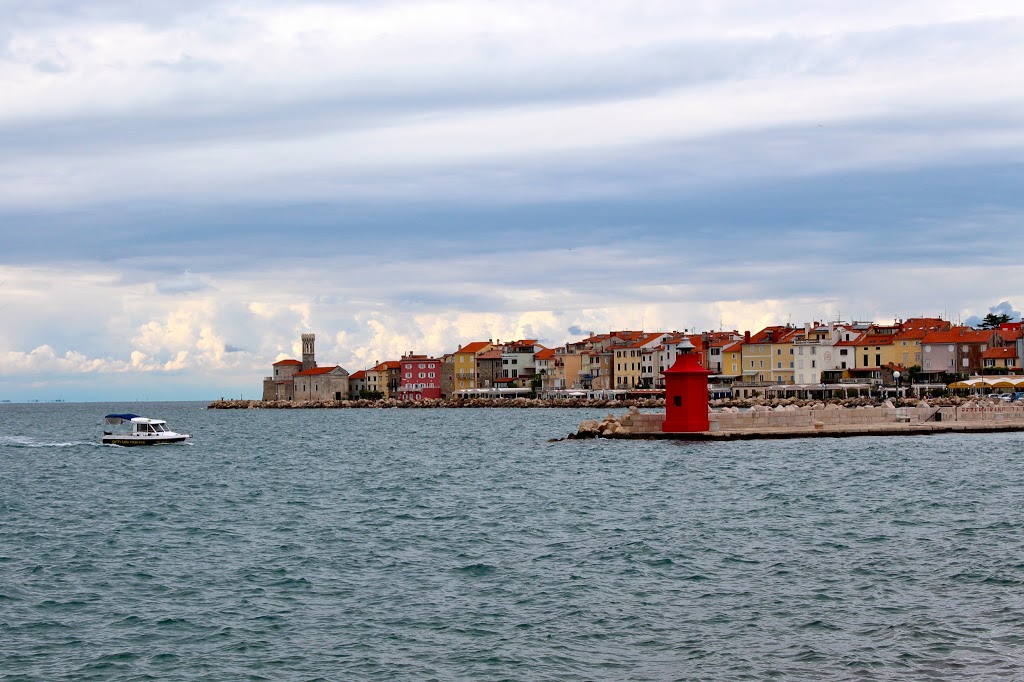 Piran has a really nice plaza– pretty big for such a tiny city. It is named after famed violinist Giuseppe Tartini, and the really interesting thing about this town square is that it used to be a marina! It was filled in at the end of the 19th century.

My favorite thing here was an older gentleman joyfully rollerblading around the square as if he was a world-class figure skater. You could see the childish delight in his movements. He stopped and chatted with the kids. I loved his spirit.

They call this the Slovenian Riviera. The water was impossibly clear, and we saw schools of purple jellyfish swimming through the marina and along the seawall.

The weather changed dramatically while we were there– sun, rain, wind… We stopped for some seafood, and Amelia and Marco spent a good hour crawling in and out of the big boulders, collecting smaller stones for the adults to carry home in bags.

This is a view from the tip of the cape, looking back at where we had come from.

We climbed that hill on the way back to the car, and I took this picture of weather over nearby Croatia… Drama!

And that is exactly where we headed the next day… Thanks for coming with us to Piran. Photos of our trip to the Croatian Island of Brijuni coming next!